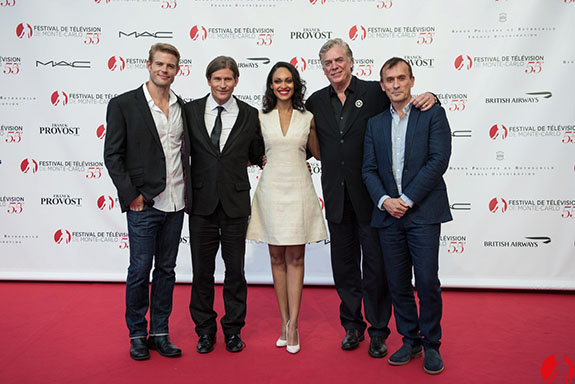 Set in the famed Garibaldi Forum, the Television Festival of Monte Carlo is a laid-back, intimate gathering of the best productions and actors in television entertainment today. The top creators of the shows are awarded the Nymphe d’Or (Golden Nymph), which is internationally recognized as one of the most prestigious awards in the television production world.

Taking place June 12 to 18, the festival featured conferences at the content and multiscreen experience halls, live panels with TV show actors, selfie and dedication sessions for the fans, projections of shows, as well as five key parties, one in celebration of the 55th anniversary of the festival.

At first glance, the festival seems like the usual red carpet gathering of famous individuals. However, what makes this event unique and striking is the intimacy of the setting and the encounters. Fans are able to get up close and personal with their favorite TV characters through meet-and-greet and selfie sessions, and professionals are able to talk with them in one-on-one interviews, which is a rare opportunity. The festival is open to all and has a convivial atmosphere.

This year’s edition celebrated the 55th anniversary of the festival, with an opening speech by Princess Charlotte of Monaco and an exclusive soirée on Wednesday night at the Hotel Monte Carlo Beach. Prince Albert II of Monaco, the honorary president of the festival, was in attendance, and festival CEO and director Laurent Puons described the party as the highlight of the event.

Among the star attendees of the festival were the cast of “The Vampire Diaries,” including Kat Graham and Candice Accola, and Terrence Howard and Taraji Penda Henson of the hit American series “Empire.” The projection of “Empire” was one of the highlights on the first day of the festival. Terry Crews of “Brooklyn 99” was also one of the main actors attending the event. He took center stage with his charismatic presence and all-around fun-guy vibe. Among the other notable actors from other shows in nomination were Robert Knepper, Cynthia Addai-Robinson, Christopher McDonald and Trevor Donovan. A few old timers also animated the festival, such as Lee Major from “The Six Million Dollar Man” (a popular American TV show in the 1970s) and Antonio Fargas, the ’70s star from “Starsky and Hutch.”

The content and multiscreen experience panels analyzed the corporate aspect of the television world. A panel called “Data is Everything” with Adobe representative Steven Allison discussed how to engage customers using data and social media. A panel on the development, production and distribution of new media with Chris Thomas, vice president of Disney ABC Television Group, discussed the future of TV. He said, “The talk about the death of television will go away. Television is more powerful today than ever and television will change the Internet completely.”

Horyou got to sit with Puons to discuss the future of TV, how it can better humanity and what it means for him to Dream, Inspire and Act. The interview will soon be available on the Horyou TV YouTube page.

Here are some winners of the Nymphe d’Or :

-“The Bold and the Beautiful” – Best Telenovela/Soap Opera

The future of work – technology, wealth redistribution and a new social pact

May 11, 2016
Have you thought of a world where nobody would have to be concerned about paying for their basic needs? The unconditional basic income (UBI)...