If you're not happy with the results, please do another search
Horyou
launches #HoryouLightChallenge to promote the UN Sustainable Development Goals (SDGs)
On its 4th anniversary, Horyou, the Social Network for Social Good will invite the winner to attend to the Social Innovation and Global Ethics Forum in September 2018, in Singapore. 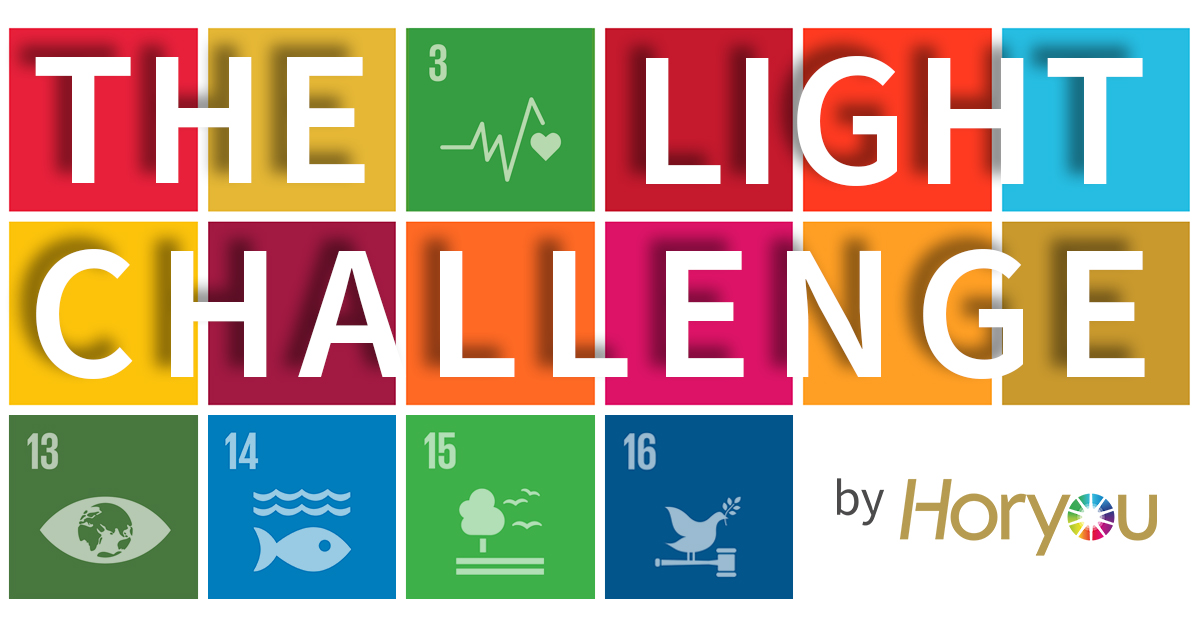 Geneva, December, 2017 – Horyou, the social network for social good, is celebrating its 4th anniversary with a challenge for internet users to spread positivity around the world. #HoryouLightChallenge aims to bring changemakers together to promote the United Nations Sustainable Development Goals (SDGs).
«Our Horyou community is constantly spreading positive actions and ideas. #HoryouLightChallenge is an opportunity to bring more people together to meet the SDGs and build a better future benefitting all», explains Yonathan Parienti, founder and CEO of Horyou. The social network was officially launched in December, 2013 and it has gathered more than 250,000 members and 1,800 non-profit organizations globally.
The challenge is open to all members of the Horyou community and to future joiners. Participants are to select one or more SDGs and show their support with a related positive action and share it on Horyou with the matching hashtag, spreading it on such social media channels as Twitter, Instagram and other and inviting friends to light their content.
The winner will be the author of the post on Horyou that has received the largest number of lights, and the 1st prize is an all inclusive 3-day trip to Singapore to participate in the Social Innovation and Global Ethics Forum (SIGEF 2018), in September 2018. «In addition to supporting the SDGs, Horyou would like its members to use their creativity and be a light within their community and beyond», says Yonathan Parienti.
#HoryouLightChallenge will accept participants up to June 18th, 2018. First and second runner-ups will be offered free entrance to SIGEF 2018, Horyou T-Shirt and Positivity Bag as well as 100 Spotlights, the global social currency for economic inclusion, which was officially launched in India, during the Global Entrepreneurship Summit (GES).

Full information regarding the #HoryouLightChallenge terms, conditions and examples, can be found on https://blog.horyou.com/the-light-challenge-by-horyou/
Be the change, be Horyou!

Fostering new ideas and processes through innovation and entrepreneurship for good

Imagine a world with clean air, renewable and endless sources of water and a no speculation financial system! Far from being the child of a utopian mind, the idea of living in such a world is possible thanks to innovation. In all countries, entrepreneurs are relying on technology to propose new solutions to the problems of our society and make a difference.

The UN Sustainable Development Goal number 9 is about building resilient infrastructure, promoting inclusive and sustainable industrialization and fostering innovation. This is one of the most successful goals, as may improvements have been so far achieved worldwide. The SDG 9 also touches on many other goals, as it generates jobs, helps to combat hunger and poverty and furthers equality. Innovative industries’ impact on carbon emissions is minimal, as they tend to be cleaner.

According to the UNDP, carbon emissions of countries that have moved towards more efficient and clean industries have significantly decreased: in Europe and North America alone the 10 largest manufacturing countries have thus reduced their emissions by 36%. The greatest challenge, however, lies in weighing improvement, knowing that developing countries evolve at a slower pace than the richest ones. Still, investment in clean industrialization and innovation has increased worldwide, with more money going to research and development, transport, economic infrastructure and energy.

Horyou has constantly been supporting innovation and eco-efficient industries. During the 2017 edition of SIGEF, in Astana, Kazakhstan, its agenda covered industrial innovation on Future Energy and Cities of Tomorrow, showcasing many ventures and projects with a high potential of changing the world in a positive way. So has SIGEF 2016, in Marrakesh, Morocco, which covered extensively the topic of how transportation, water, energy and financial industries are innovating in sustainable and inclusive ways, and where a number of entrepreneurs were invited to present their projects as part of the SIGEF Awards, a social innovation-oriented set-up that showcases and awards the most relevant innovative ideas in social good. Two winning projects were about building a cleaner environment using simple and ground-breaking energy.

If you wish to support this SDG, you can do so through Horyou. Go to Horyou platform and choose an NGO or project that helps promote sustainable industries and innovation in your region or anywhere in the world. Your support can be made easier and more effective with Spotlight, our digital currency for impact. Check it out and start using it to engage in any cause you feel concerned about. Be the change, be Horyou!

Since 2009, the European Youth Award have been rewarding youth innovation and creativity in technology. The award is an undertaking of the International Center for New Media (ICNM), a member of Horyou, the social network for social good, which also organizes special events and grants awards to support innovation and entrepreneurship.

This year, EYA’s applications are open to European entrepreneurs, startups and students who dream to develop their creative potential and benefit from some of Europe’s leading business personalities’ mentoring. Speaking for ICNM, Birgit Kolb has granted us the following interview.

– What is EYA and when was it created?

The European Youth Award (EYA) is a pan-European contest for young people, entrepreneurs and startups creating digital projects to improve society. It was called into life in 2012 by Prof. Peter A. Bruck, Honorary Chairman of the International Center for New Media, and is conducted under the patronage of the Council of Europe and the Congress of Local and Regional Authorities.

The Winners Event (EYA Festival) is a unique event combining knowledge, innovation, networking, inspiration and motivation. It takes place in Graz, Austria, in November of each year.

– What are your goals in supporting innovation among youth?

The goals of the European Youth Award are

– In times of technology and business disruptions, how do you support socially and environmentally responsible innovations?

We believe that knowledge and a vibrant network are the key factors for success. Therefore, we support EYA Winners by giving them an international stage to pitch their project and get comprehensive feedback from experts, mentors and students analyzing the winning projects profoundly.

The EYA network is a most vibrant and lively one. Individuals attending one of our events usually say that it is a very unique experience that they would have never wanted to miss. They usually feel like they have become a member of a new family where they can receive support and guidance any time.

That’s how we think that socially and environmentally responsible innovations can be supported best.

– Can you mention some interesting innovative projects that participated in the last editions?

Sure, plenty! All of the EYA winners are very unique. Perhaps the following links are good examples to show the great variety of EYA and its projects: I Mirabilia, Jerry Do It Together , GovFaces and Aprendices Visuales.

– How many applications do you expect this year? Call the Horyou community to participate and apply their projects!

We expect more than 100 applications this year. The deadline is on July 31 – we kindly invite the Horyou community to take this unique chance and apply now with their creative, digital project with impact on society!

It’s a warm day in Geneva. A group of young entrepreneurs from different backgrounds and cultural origins is gathered for the first of the 4-day program of the Entrepreneurship School. The educational project, in its 25th edition, is an initiative of ThinkYoung, a Brussels-based think thank which aims to improve the youth world and provide developing tools to young people. The goal of the program is to create, in groups, management projects until the end of the week – the best one will be awarded for its creativity, feasibility, sustainability and profitability.

The first speaker of the afternoon is Yonathan Parienti, CEO and founder of Horyou. Surrounded by curious faces, he has to present the social network for social good and then, be ready to answer the questions of each group for 5 minutes, in rounds. They are challenged to make as many questions as possible, to push the speaker as much as possible. Eager, they want to know about everything – funding, recruiting, partnerships, personal features.

Parienti seems happy about their passion and curiosity – it is exactly what he expects from this generation of future business leaders. “The new generation is getting ready to manage their own business very soon. Being an entrepreneur is not to wait for things to happen but to build something that is missing in the world”, he says. He is asked to tell his story – a former banker from JP Morgan and Bank of China who, after 13 years on the financial market, decided to build his own company, inspired by the dream to make the world a better place.

Like many entrepreneurs, Yonathan kept his job while he was working on the initial steps of Horyou. After a few months, he finally decided to “jump” into the entrepreneurial adventure. “At some point you have to give all your energy and time – and then you literally jump”, he says. Between 2012 and 2013, he built the team and in December 2013 he launched the Horyou platform – which now congregates a community of more than 250,000 users and 1,100 organizations from 180 countries and is currently closing its 4th investment round.

The audience is very interested about investors and partnerships – the best advice, he says, is to choose them very well. “Be certain that people that invest in your company really match your ideals and the ideals of your company. If you don’t have the right investors with you, your chance of success will be compromised”, he says. It’s not only a matter of being chosen, then. It’s a match.

Connect online and offline worlds for the social good. This is one of the missions of Horyou, but it was not an obvious choice since the beginning. “We started as a social media platform, but soon we realized we needed to be more, to truly connect with members and organizations”, he says. The first experience was with the Social Innovation and Global Ethics Forum, the SIGEF, in 2014, organized in Geneva by Horyou. “When we gathered 2,500 global citizens, coming from all over the world, meeting for 3 days of interactions, it was the very key moment we saw what we were doing was meaningful”, he says. The growth strategy continued with digital campaign, documentaries, the launch of Horyou blog, Horyou TV, the mobile application and other projects that made the enterprise unique and continuously innovative. Currently, Horyou team is organizing the 3rd edition of SIGEF, which will take place in November in Marrakesh, Morocco, during the COP 22. It’s, indeed, a match.

When asked about challenges, Yonathan is optimistic. “Life is not about failure and success. It’s about what do you do now. It is about finding the energy and resources to face whatever challenges. I find this in people we support and I get inspired by them”. As an advice for the future entrepreneurs, he says: “Challenges should be seen as part of the path for a start up. You have to plan it. You have to go for what you need. Be confident, believe in your project”.

After a few round of questions, the lecture is done. However, the entrepreneurs are not tired of asking – they surround Yonathan during coffee break and ask for more – contacts, stories, but advices over all. The last one, before leaving, is that there is not such a thing as a recipe for success. Trust your intuition, he says. It is and will be your best friend.