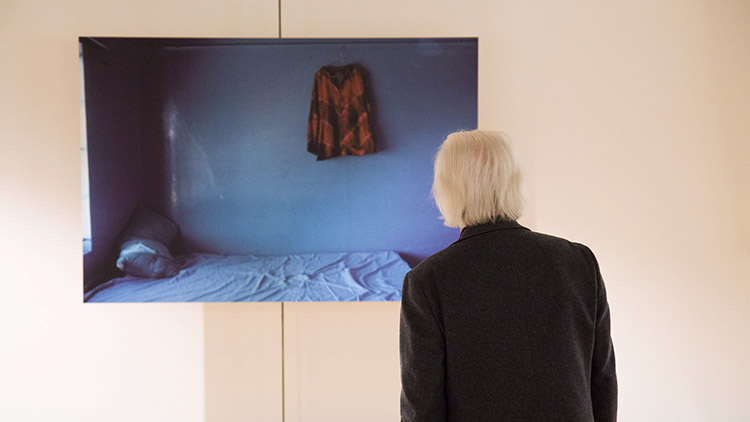 We sat in a booth at the rear of the Fert Barton hall in Geneva, a gracefully and beautifully lit white exhibition space. At its center, a long sculpture representing passing people and beyond that hang two large size photographs by photographer Jean Jacques Dicker. The two photographs represent two rooms he lived in during his many travels – Dicker has visited 92 countries in his lifetime and he masters six languages. They were part of an exhibition that was to showcase the African continent. Well-chosen they represented the highlights from his two years travel on the continent, in 1977-1978 and then again in 1984, crossing from North to South Africa. Horyou seized a chance to talk to Mr. Dicker about his lifetime of travels and the stories behind his photos.

As he walks in, it is obvious that Jean Jacques Dicker is a child of the Hawaiian Islands. Wearing sandals, a tussled scarf and a light khaki jacket, he states his rebellion against the cold weather and his desire to return to his home in Honolulu, Hawaii. Born and raised in Switzerland, he studied at the University of Geneva before heading to Honolulu to study at the University of Hawaii. Today, he still lives and finds inspiration on the island as a waiter and a photographer.

The Afrique exhibition began on the 24th of November 2015 and will carry through to the 15th of January 2016. The photos tell the story of a well-travelled man, one that has found his “home” in many different places. Michel Auer, founder of The Auer Foundation, made the exhibition possible: “I have known Michel for many years and he decided to organize this exhibition for my work and that’s how I’m here,” Mr. Dicker utters. His photography career was triggered by one simple fact: “I wanted to travel,” he confesses. “I finished University and worked for a year then I travelled. I came back and took photo course because I figured if I could do that I could make a little money on the side.” Little did he know he had a natural talent with the camera. He got countless compliments for his work, learnt how to print, entered competitions and won awards: “I was flattered and enjoyed doing it, which is the most important part”, he admits. 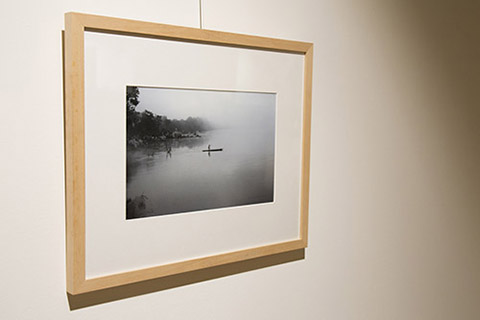 At the age of 71, Mr. Dicker has made his “home” in Kenya, Japan, South Africa, France, Switzerland and New York. We asked him about the highlights of some of these experiences, starting with the African continent. “In Africa, the highlights are the people, the relationships I built,” he says. One of the exposed photos is a shot of his room in Kenya, where you can tell he lived a simple life. It shows a simple bed and a simple coat hanging above the bed. He lived with prostitutes in Nairobi, as part of one of his photographic projects. Then, finally, he made it to South Africa: “travelling through the continent I crossed quite a few unsettling countries; but South Africa was the scary one. It’s what we had been hearing on the news: Mandela was in jail, apartheid was in full bloom and I was breaking the law because I had a black girlfriend when I was there.” Mr. Dicker didn’t let himself be influenced by the social and political state of affairs; he treated everyone equally and made life long friends thanks to his kind attitude: “I worked in a restaurant where the waiters were white and the assistants black. I would help them out, I would eat leftovers with them, they would ask if I didn’t mind eating with them and I would say of course not! I was from Europe and that was normal to me”, he recounts. Upon his departure, the assistants made a circle around him and told him he was the only white man they respected because of his humility and kindness.

In his South-Asian adventures he met with his aunt. An experience he relates with emotion, joy and awe just as if he was reliving it: “I met my Aunt who was French and who went to live in India about 40/50 years ago. I had lost touch with her since 1962 but I knocked on her door and said remember me I’m your sister’s son. That was fun. I met my nieces as well.” This experience was proof that we can find home in travelling as well.

Today, If there is still a place he would like to visit, it is Brazil; having missed the chance to go years ago. A hitch hiker at heart, in the sixties he took the road from San Diego to Mexico and then to different places for about 3 months: “I did that in 1966, back then it was all about flower power. I’m not sure what it would be like to do that today”, he adds.

Aside from his travels, Mr. Dicker keeps photography close to home. One of his recent series is comprised of portraits of restaurant workers, his colleagues back in Honolulu; a black and white series delicately highlighting the different personalities he encounters and works with everyday. “I’m not big on messages in my photography. I want to capture beauty and experiences for myself. If people like it, that’s even better,” he explains.

Mr. Dicker is a dreamer from the sixties: “I dream that there will be no religions, no nations and no flags. These are the things that separate people,” he declares passionately. For him inspiration simply resides in photography. He points to one of his photos of his bedroom in Kenya: “Hopefully, when you see that you are inspired to go live in a room like it or get on the road,” he says. He then points to a photo of a child on a boat on a river in Kenya as well: “look at that kid. I am so fortunate to have witnessed that and it was even more fun and special that he didn’t notice me taking the photo. He certainly made me so happy and maybe he will make others happy too.” To act for Mr. Dicker is to share his experiences through conversations such as this interview: “To act is to talk to you and say all these things about nations, flags and religions and if you put that in an article and someone is inspired or semi-thinks about it, that’s a good thing.”

His exhibition continues until the 16th of January at the Espace Fert Barton in Geneva.

The future of work – technology, wealth redistribution and a new social pact

May 11, 2016
Have you thought of a world where nobody would have to be concerned about paying for their basic needs? The unconditional basic income (UBI)...