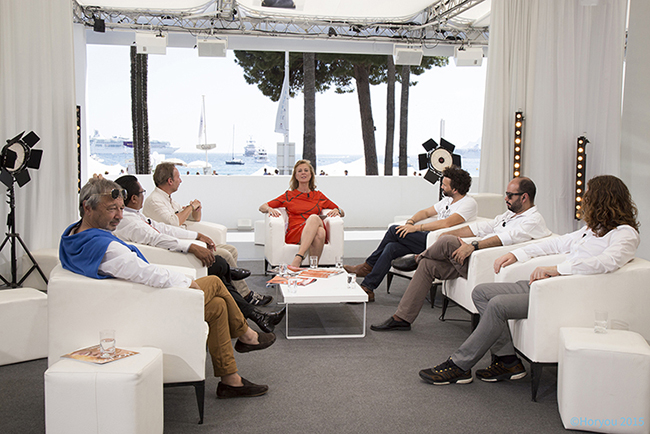 In the gardens of Le Grand Hotel, Horyou Village brought arts, culture and diversity to the forefront of the Cannes Film Festival.

At the center of the shiny white Village was the interview stage. It was the heart of our camera-documented encounters with truly inspiring characters: from producers to actors to entrepreneurs and innovators in diverse fields of expertise.

The interviews allowed these various actors in social good to speak of their passion for creating a better world. The interview stage welcomed over 100 guests and hosted more than 60 interviews.

On the first day, Horyou interviewed Eric Schmidt, executive chairman of Google. Horyou CEO Yonathan Parienti spoke with him about innovative technology and how social media is leading the way forward. “Horyou gets people to talk to each other and connect to funders. I can’t think of anything better to getting people to work together,” Schmidt said. Watch the interview here.

Authors Igor and Grichka Bogdanoff were also a highlight at the Village with an interview about the knowledge of science in connection with the universality of love: “We need to be marveled and live passionately … we are all connected,” Grichka Bogdanoff said. Watch the interview here.

Horyou also interviewed Jacques Attali, a French economist, writer and senior civil servant who is using his positive-economy movement to create a better world: “Diversity is key to the survival of humanity,” he stated. Watch the interview here.

The various panel discussions on our Global Causes Days sparked debates about protecting Nature and Wildlife, Education for All, Innovation for Good and many more topics.

Hosted by Ushuaïa TV creator Christine Oberdorff, the Nature and Wildlife panel on May 17 focused on the importance of cinema as a voice for indigenous people and their environment. The panel included Christian Holl, a nature sound chaser and composer who is on the Horyou platform. Watch the panel here.

Six female standouts in the film industry participated in our Women Empowerment panel on May 19. They discussed women’s leadership in their respective industries. The panel included Carla Ortiz, a Bolivian actress, producer and director, and was led by Vincent Magnenat of the Horyou team. Watch the panel here.

The Innovation for Good panel on May 20 discussed the progress made so far for man to enter space, the development of space tourism and where that will lead humanity. Airbus engineer Garrett Smith was included on the panel led by Manon Barthélemy of Horyou. Watch the panel here.

Associations from the Horyou platform present at the Village also voiced their projects on the interview stage. Among many others, ASPOBRIR founder Rosine Totureau was interviewed about how the organization is bringing libraries to rural areas in Cameroon (watch here). Keep a Breast foundation founder Shaney Jo Darden and her team also spoke of the foundation’s fight against breast cancer (watch here). Action Against Hunger external-relations director Alex Cottin explained how the group is saving the lives of malnourished children in the world (watch here).

The interview stage gave a voice to all of these promoters of social good – all living proof that together, by sharing our ideas and visions, we can create a better world. Find all the interviews here.